ShareTweet
Every other post seems to be about writing on this blog. But bear with me for a fleeting moment; this one is actually going to be a useful post because I’m about to reveal everything I know about writing. I don’t have formal writing training. English classes in school really didn’t teach me anything – these are writing tricks I’ve picked up over the years after reading hundreds of books and billions of internets.

Sit down and write. It doesn’t matter what you write; challenge yourself to think of the vaguest, bleakest and most dull memory you know and try to turn that into a story. Describe that one time you had tea at the balcony of your grandparent’s house; that one time you were scared of walking home alone; that time your were on holiday but spent your whole day in the hotel anyway. Take up topics that don’t immediately inspire you to punch out words and make yourself write.

7) Use words whose meanings you don’t know.

Don’t feel ashamed to use words whose meanings you don’t know. Comb through the thesaurus if you’re ever out of ideas. Pick a word whose sound you like. Mellifluous, decadence, perfunctory, quintessential; these are words I personally like because of the way they sound. These words to me are the rose petals at a pretty wedding, an ice cream after a lovely dinner. They spice up your language, making a dull sentence slightly less vacuous.

How do you find these words? Well, you could underline it whenever you come across a word like that in a book you read. But I’ve realised that this method is inefficient, since a word doesn’t really enter our lexicon till we’ve used it in abundance. It rarely happens to me, personally. I’d learn maybe one new word a week or so. So here it is: whenever you want to learn a word, write a story around it. Just sit down and write; it doesn’t even have to be good. Let’s say I want to learn the word mellifluous.

“Stephen was incredibly frustrated by the way his language never sounded quite as good as his peers’. He’d watch himself in video recordings on Youtube. He’d speak into the mirror. But he always sounded monotonous. He sounded like he was born and brought up in a chemistry lecture and spent his holidays in a Sub-Saharan cave speaking with bats. He was especially jealous of his friend Hugh, whose voice sounded marvelous and angelic. Every sentence he uttered was pure, unadulterated music; every word had score, every paragraph had a crescendo. His mellifluous vocabulary was particularly alluring to those he interacted with. Stephen wanted to learn to make his words flow like a river, or like a Rachmaninov piece; he wanted it to be mellifluous.”

I chose the word mellifluous because I use it a lot, even though it’s slightly uncommon, and also because it gently segues me into the next point; turn your words into music. Painting, literature and music are all forms of art. Many would argue over what’s the purest and most pristine form of art, but it’s no secret that words need to sound like music to make it interesting. I don’t literally mean “sing the words”; it’s a bit more subtle than that. Words need to have a certain rhythm. Shakespeare’s verses sound great because they’re written in something called Iambic Pentameter.

Shall I compare thee to a summer’s day?
Thou art more lovely and more temperate:
Rough winds do shake the darling buds of May,
And summer’s lease hath all too short a date:
-Shakespeare, Sonnet 18 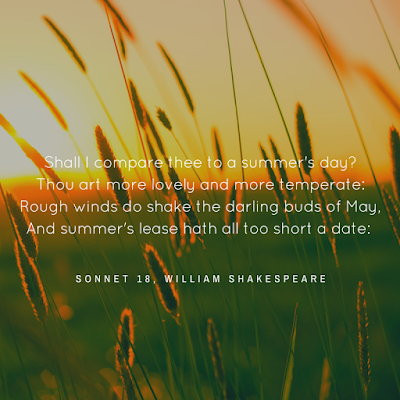 Explained simply, each line has ten syllables, which gives it five iambs. An iamb is a pair of syllables where the second syllable is stressed, such as the word “goodbye”. Hence iambic pentameter; five iambs. So why am I explaining this? I’m telling you this to familiarise youself with the basic concept of rhythm, not just in poetry, but in prose.

4) Vary the length of your words.

You should not write words in iambic pentameter unless you’re writing a Shakespearean sonnet. Look at the verse above, though – it sounds like it’s rolling on gently like an ambient drum beat rather than being a series of forced interjections. Get your words to sound like that; get them to sound poetic. Use short sentences. Use a few more. Once you’re done using them, try a medium sized one. Perhaps, if you’re so inclined, you could take your reader on an unsuspecting adventure every once a while, fly them into wind, give them a taste of lexical freedom, with a great big sentence like this one. Or you could not.

See what I did at the end of the last paragraph? Like a song, words need to have rhythm, and enough structure to be considered correct, but they also need variance. This isn’t a rule, but it’s more important than a rule because a reader demands variance. No one will read what you write if your sentences all sound the same, if they lack that fatal attraction of poetry or that charming grasp of drama that they desire. You need variance.

3) Learn how to use punctuation. (Yes, a little learning is involved in this process.)

Well, on to punctuation. This isn’t really important as long as you’re correct. But what defines ‘correct’ with things like semicolons (;), colons (:), ellipses (…) and dashes or hyphens? Well, that depends on the writer. I would say from personal experience that it doesn’t really matter where you use any of these unconventional punctuations as long as you don’t overuse them – perhaps once or twice a paragraph.

Colons are used when providing examples. “The names of the winners are: Upamanyu Acharya and Thom Yorke.” If you’ve noticed, I use semicolons a lot, and to be perfectly honest, I don’t know where to use them. I’ve always used it to join two long and related sentences together; no one has corrected me so far, so I’ve continued doing so.

You can also use a semi-colon for giving several examples which have commas or the word ‘and’ in them. You can use them for explaining your examples by adding a short sentence to them. “The best comedy duos that I know of are Mitchell and Webb, they’re very good; Fry and Laurie, because of their understanding of classics; and The Mighty Boosh because I don’t understand a word they’re saying.”

A hyphen is a versatile punctuation and you can use it anywhere – it’s a literary crutch; something you use when you don’t know what else to use. Hyphens are often very informal, so don’t use them more than two or three times in an essay.

Also avoid ellipses (…) for the same reason, and remember, any more than three dots is not part of the English language. So these are how I use these punctuations. But then again, I’m not an expert…

2) Use vivid imagery and symbolism.

Think of the English language like a pretty but battered palette full of vibrant colours. The pirated Microsoft Word 2007 in front of you is your canvas. It’s up to you to use those words to paint a pretty picture. If you’ve ever read the English language you’ll know that imagery is one of the most powerful forms of expression. The best writers use vibrant imagery to describe their setting to give their readers a sense of what the story is going to be about.

“When I was alive and had a human heart,” answered the statue, “I did not know what tears were, for I lived in the Palace of Sans- Souci, where sorrow is not allowed to enter. In the daytime I played with my companions in the garden, and in the evening I led the dance in the Great Hall. Round the garden ran a very lofty wall, but I never cared to ask what lay beyond it, everything about me was so beautiful. My courtiers called me the Happy Prince, and happy indeed I was, if pleasure be happiness. So I lived, and so I died. And now that I am dead they have set me up here so high that I can see all the ugliness and all the misery of my city, and though my heart is made of lead yet I cannot chose but weep.”- Oscar Wilde, from ‘The Happy Prince’

The above quote is rife with imagery and symbolism which are neatly explained in the paragraph itself. Tears indicate sorrow; the wall indicates entrapment, both physically and emotionally as the prince does not know what sadness felt like. Before moving on to actual descriptions, Wilde uses a sentence or two to use vivid imagery to give you context for what follows. This is important for anything you write, even essays.

When something dark or foreboding is about to happen in a story, most authors would subtly hint at it beforehand with descriptions of unnatural events, or use an entirely different paradigm to explain it. In Jane Eyre, the splitting of the chestnut tree by lightning while Rochester proposes to Jane symbolises either the force of nature in our world, separation of loyalties of Rochester, or even the fact that it wasn’t meant to be. The symbolism is open to interpretation, but what’s important is that Brontë gives the reader something else to relate to other than pure event and description, in this case it’s the tree. This builds the world that the reader is surrounded by; it’s the background that makes the world interesting, event though it’s not directly obvious or related to the story.

In essays, use metaphors and similes that aren’t dissimilar. If you use a metaphor related to water, for example, try to make the next one related; make it about sailing, or swimming. This is a subconscious trick to associate different parts of your essay to the same framework, because both the similes or metaphors relate to the same theme, and the reader is able to build a mental bridge between two different chapters (for example) using the theme of the metaphor. Smart!

Finally, it’s not about reading a lot. It really isn’t. One must not read a lot to be a good writer. It helps, but it’s not what you need. To be a good writer you need to understand what the reader wants, deliver it with a few twists. The twists are what makes it interesting. Anyone can write a five hundred word story about happiness, but how many of us would be able to take a story about a boy living in the slums and turn that into an ecstatic comedy? Your work needs to be interesting, though, because we are surrounded by dull people in our daily life. Reading is an escape, and when someone chooses to escape into a world you created with words, it’s imperative that you be more interesting than the readers’ dreary and plodding life. So you can either read a lot or experience the world for yourself – go do something interesting. In the end, a good book is not about the language, it’s about the experience.

What Makes a Good Speech (And What Doesn’t)

5 Tips to Become a Guitar Pro

Why Do We Prefer Stories to Data?

IIM Ahmedabad MBA 2021. My hobbies include being vague, bending rules, time-travel, and embellishment of words. This is my personal blog where I write on topics ranging from blockchain, to leadership skills and the consistency of jam.

I went back to Calcutta this December, and the number of times people told me...

Doughy bread and melted butter,Thirteen cheeses of different colourScrambled eggs are yet anotherWay to add...

Two weeks ago, the verdict on the Sasikala corruption case surfaced. I have no idea...

In this existential paradigm that we all live and let die in, we have...